In dealing with quadratic factors, it is often useful to rewrite them in a form which does
not explicitly involve a linear (x) term. To illustrate this process of completing the square,
consider the polynomial

Thus, we have rewritten the original quadratic in a form which lacks a linear term.

If the coefficient of the x2 term isn’t 1, we must factor it out before starting. The following
two examples show how to do this.

Solution: Again, we start by factoring out the coefficient 5 of y2; this time it doesn’t factor
out of the constant term nicely, so we’ll leave the constant term hanging (but be careful to
add and subtract in the same place—inside the parentheses):

(by substitution, as discussed in section 2). For integrals with quadratics in the denominator,
the main tool is the formula

which comes from the basic integration formula

using the
substitution w = x/a. If the quadratic involves a linear term, we can first eliminate it by
completing the square.

Solution: The denominator is an irreducible quadratic (try the quadratic formula—there are
no real roots). Thus, we cannot further break down the integrand using partial fractions.
To convert it to a form we can integrate, we first complete the square. Factoring out the
coefficient of x2 and adding and subtracting (−1/2)2 = 1/4 gives

We can then do the integral using the substitution 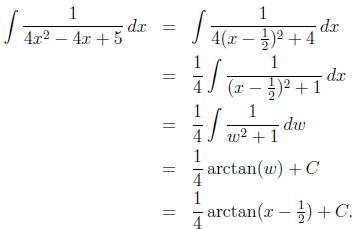 as two terms which can be integrated by methods already
considered.

Solution: Since the derivative of the denominator is 2s + 3, we add and subtract 2 in the
numerator to obtain

The first of these terms is easily integrated by the substitution w = s2 + 3s + 7; the second
can be integrated by completing the square and using the formula involving arctan.

7 Putting It All Together

Having discussed each of the steps separately, now it’s time to put them together to integrate
rational functions. For our first example, we simply collect the pieces we worked out in detail
in several previous examples.

Solution: Since the integrand is an improper rational function, we first divide the denominator
into the numerator to obtain

Finally, we integrate term by term:

Solution: Here the integrand is a proper rational function and the denominator is already
factored, so our first step is to find the partial fraction expansion. This must take the form

Note that since the factor (x − 1)2 appears with multiplicity 2, we must include two corresponding
terms in the expansion (the terms involving A and B). Clearing fractions (multiplying
by the denominator) gives

Plugging in the values B = 1/2 and C = 1/4 we already found leads to A = 3/4. Substituting
these into the partial fraction expansion gives

Finally, we integrate term by term:

(for the middle integral we used the substitution w = x − 1).

Find the integrals in problems 1–4:

In problems 9–20, give the correct form of the partial fraction expansion for the rational
function. Do not evaluate the undetermined coefficients A, B, C, . . . . 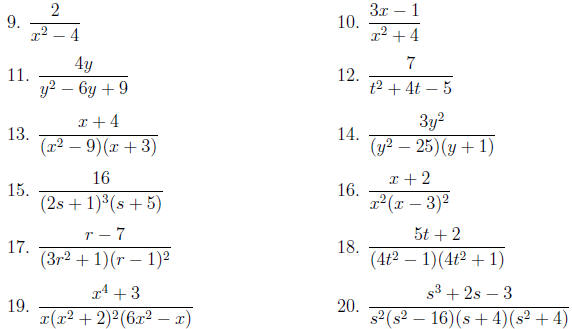 Rewrite each polynomial in problems 25–30 by completing the square.

Find the integrals in problems 31–36: