Among the intriguing geometric properties of a parabola is this: if AB is any chord
of the parabola and L is the tangent to the parabola parallel to AB, then the midpoint of
the chord, the point of tangency of L, and the point where the tangents to the parabola
at A and at B intersect are collinear. Moreover, the line they form is parallel to the axis
of symmetry of the parabola. So, if we make the parabola’s axis of symmetry coincide
with the y-axis in a Cartesian coordinate system, then it follows that the x-coordinate
of these points is the average of the x-coordinates of A and B. (See Stein [2] for more
on this.)

In [3], Stenlund shows that, among all analytic curves, this property is unique to
parabolas. In discussing this result, Stenlund looks at a second curve associated with a
parabola. Specifically, fix a positive horizontal displacement h, and, for any chord AB
where the x-coordinates of A and B differ by h, look at the point where the tangents
to the parabola at A and at B intersect. The locus of all such intersections of pairs
of tangents forms another parabola, as Stenlund demonstrates. Moreover, this derived
parabola is a translation along the axis of symmetry of the original parabola by an
amount that depends on h. Figure 1 illustrates this construction for the parabola y = x2
with h = 2.

We wondered whether a parabola was the only curve for which this associated derived
curve was essentially a copy of itself, and thus we were led to consider exponential
functions.

.
Fix h > 0 and let t be an arbitrary real number. The lines tangent to the graph of g at 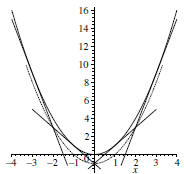 respectively. The x-coordinate of their intersection point is

so its y-coordinate is

(The left-hand diagram in Figure 2 illustrates this construction.) We thus have parametric
equations for the associated derived curve, and we can easily eliminate t to get
yt directly as a function of xt . After simplifying, we have

In summary, we have shown the following:

Then the derived curve for the exponential function

and its associated derived curve

We now consider the behavior of the scaling function α (k, h). To begin, let

, we see that p
attains its absolute maximum value at p(1) = 1. The substitution of f (x) for t shows
that the function

nential function is not a translation, but a rescaling of the original curve by a factor
whose properties we have analyzed.

In [4], Wilkins uses intrinsic geometric characterizations of the conic sections to
generalize the main results of [3]. He shows that the property of parabolas cited in
the opening paragraph of this article can be expressed as an angle-bisection property
that is unique to the conic sections. Lacking an intrinsic geometric formulation of the
derived curve of an exponential, we have been unable to determine whether or not the
exponentials are unique in possessing the property that the derived curve is a multiple
of the original curve.