(Terminology: All lines are “straight” lines. Every line is a curve. Not every curve is a line.
A line is a curve that is not curved.)
We will review some familiar facts about lines very quickly with very few examples:

The line has constant “steepness”, not the other curve. The line rises at a constant rate, not the
other curve. 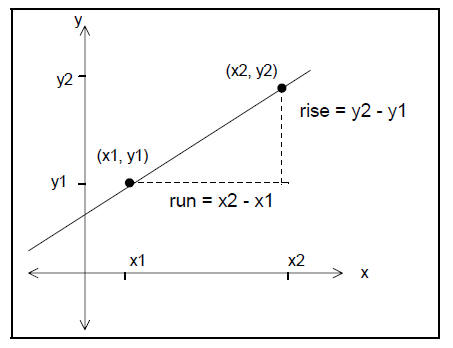 Our measure of steepness: slope,

Our measure of steepness is a signed measure.

Convince yourself for each of the above pictures, that the claimed sign of the slope is correct.
In each case, pick any two points along the line, one with x1 and one with x2; choose one as the
starting point, one as the final point. Note the sign of the run,

The steeper the line, the greater the magnitude of the slope.

Different forms for the equation of a line (This is not an exhaustive list.):

Question:
True or false? Every line has exactly one y-intercept.
If this statement is false, describe the exceptional lines and the number of y-intercepts they
possess.
Answer: False. There are lines which lack a y-intercept. (Which lines are they?) There is one line
which has infinitely many y-intercepts. (Which line is it?)

Example: Find the equation of the line which passes through the points (3, 2) and (1, 5).
First, we find the slope of the line:

The point-slope form of the line is therefore, .

You should not leave your final answer in point-slope form.
Solving for y, we obtain the slope-intercept form:

(y-intercept = 13/2)
(To check your answer, you should plug in the two specified points which must lie on the line.
For example, when x = 3,

5. General form: The equation of every line can be expressed in so-called “general form”,
Ax + By = C, where A, B, and C are constants, and A and B cannot both be zero.

There are infinitely many ways to write the equation of a given line in general form. After all,
multiplying the equation by any non-zero number does not change the set of points which satisfy
the equation.
So which numbers should we use as our A, B, C?
Some like to insist that A, B, and C be integers (if possible), with no common factors.
We may sometimes impose this restriction, but a far more sensible restriction would be to insist
that (if possible) A, B, and C possess meaningful interpretations.

Example: Refer to the last example. Write the equation of the line in general form.
Move the x-term to the left by addition to obtain, .

Since there is no context for meaningful interpretation, we may as well pretty up the equation:
multiply both sides by 2 to obtain 3x + 2y = 13.

, a linear equation
in n variables.

(Question: What is so general about the general form ? Why isn’t y = mx + b sufficiently
“general”?.
Hint: Try to write the equation of a vertical line in the form y = mx + b.)

Anticipatory note: The constraint we have imposed on production of widgets does not seem all
that reasonable. If we have 18 available hours of labor, then we cannot use more than 18 hours,
but it should certainly be possible to use less than 18 hours. When we get to “linear
programming” in Chapter 3, we will impose a much more realistic constraint on the production
of widgets, namely the inequality 2.5x + 3.2y ≤ 18.

To graph a line:
It is clear to all of you that two points determine a line, so that once you have plotted any two
points on the line, the graph of the line can be constructed by using a straightedge to draw the
line passing through the two specified points.
Recommended method for sketching (non-vertical, non-horizontal) lines:
Set x = 0, solve for y to obtain the y-intercept. Plot it.
Set y = 0, solve for x to obtain the x-intercept. Plot it.
Sketch the line passing through these two intercepts.

This method has many advantages for us:
1. Since we will be working with equations in general form, it is especially easy to solve for
the intercepts. To find the y-intercept, just cover up the x-term, and solve for y. To find the
x-intercept, just cover up the y-term, and solve for x.
2. Since the points are on the axes, not in the interior of the quadrants, they are easier to plot.
3. As we will see in Chapters 3 and 4, the intercepts often have great significance.

Note: This method will not work on lines which pass through the origin. If the line passes
through the origin, you will need to plot a 2nd point in addition to the origin. You could plug any
value of x (or y) into the equation, solve for the other coordinate, then plot the resulting point.