The Order of an Integer Modulo n

Example: Consider the powers of 2 modulo 7:

The proof is just:

The order of an integer modulo n is of interest in general terms because it gives us
information about how exponentiation works in modular arithmetic. But here’s
an interesting little application that is not in Burton. It turns out that if a fraction
a/b has a repeating decimal, and gcd(b, 10) = 1, the length of the repeating block
happens to be the order of 10 modulo b.

Here’s an example: Find the decimal fraction for 1/7 using long division. You end
up doing the following calculations:

so it repeats, giving

But compare the calculation of the order of 10 modulo 7: 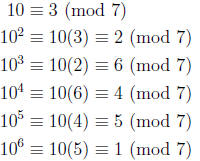 , so the repeating block is n long. Now

so the block length is no greater than k.

Here is some more detail on decimal expansions of rational numbers, from the
book An Introduction to the Theory of Numbers, 5th Edition by the famous math-
ematicians G. H. Hardy and E. M. Wright. We will look at fractions of the form
a/b, where 0 < a/b < 1.

Suppose gcd(a, n) = 1. Then the order of a modulo n must divide Ø(n). If it
happens that the order of a equals Ø(n), so it’s the largest possible value for an
order, we call a a primitive root of n.

Theorem (8.4). If a is a primitive root of n then a, a2, . . . , aØ(n) are incongruent
mod n. So they are congruent in some order to the positive integers less than n
that are relatively prime to n. So they form a “reduced set of residues” mod n.

So primitive roots are interesting and useful. But unfortunately, not all integers
have them. For example, n = 8 does not have a primitive root. To verify this,
note Ø(8) = 4 so we are looking for a number relatively prime to 8 with order 4.
But only 1, 3, 5, 7 are relatively prime to 8; and the respective orders of these are
1, 2, 2, 2. The centerpiece of section 8.2 in Burton is the theorem:

Theorem(8.6). If p is prime and d | p−1, then there are exactly Ø(d) incongruent
integers with order d modulo p. In particular, there are Ø(p − 1) many primitive
roots.

So prime numbers have primitive roots. But:

The proof of this is actually fairly simple. By multiplicativity of Ø we have Ø(n) =

. Now it happens that Ø(r) and Ø(s) are both even, since r and
s are bigger than 2 (see Theorem 7.4 in Burton). So by Euler’s Theorem, if a
is relatively prime to n we have

. So the order
of a is less than

We now give a small example about how to find integers of a given order.

Example. Find all positive integers less than 41 with order 8 mod 41. Use the
fact that 6 is a primitive root of 41.

The idea is to look at powers of 6.

We conclude with a little look at an interesting topic from section 8.4 of Burton:
the theory of indices.

Suppose n has a primitive root r. If gcd(a, n) = 1, define indra to be the smallest
positive number k such that a ≡ rk (mod n). We call this the index of a relative
to r.

The point of this is as follows: One way of defining logarithms is to say that

provided ax = b. For example,

solves 2x = 8. So the index of
a relative to r resembles the logarithm of a base r. It turns out that indices obey
rules similar to those of logarithms: 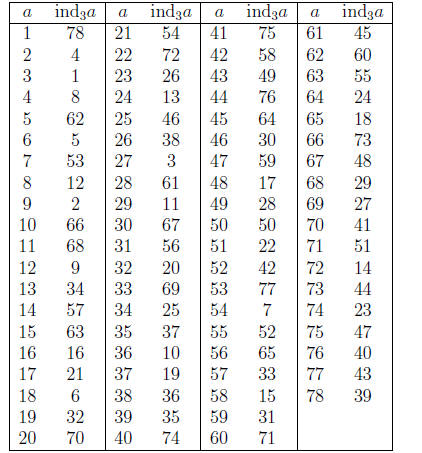 Example: We can use this table to solve the congruence 5x7 ≡ 20 (mod 79). If
we take indices of both sides, and use the rules of indices (similar to the rules of
logarithms), we get

(Note, the modulus switches to 78 when we take indices because of Theorem 8.2: