In this section we study the properties of geometric shapes that belong to
the same plane such as lines and angles.

Next, we list some of the important properties of lines.

Angles: Measurements and Types
We have seen that an angle is the opening between two line segments with
one common endpoint. An angle can be also defined as the opening between
two rays with the same endpoint called the vertex. We call the rays
the sides of the angle. If A is the vertex, B is a point on one side and C is
a point on the other side then we write∠BAC. See Figure 38.2. Note that
the middle letter in the notation of an angle is always the vertex. Sometimes
only the vertex A is given. In this case we use the notation∠A. Also, angles
can be labeled using numbers. In this case we use the notation∠1 to denote
the angle labeled 1.

An angle is measured according to the amount of ”opening” between its
sides. A unit of angle measure is the degree. A complete rotation about a
point has a measure of 360 degrees, written 360° . Thus, one degree is

of
a complete rotation. We will write m(∠BAC) for the measure of the angle
at vertex A. 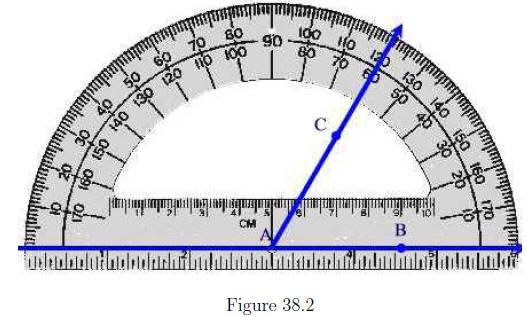 Vertical angles are congruent as shown in the following theorem.

Angles Associated with Parallel Lines
If two lines k and l are parallel then a line m as shown in Figure 38.5 is
called a transversal line. In this case, there are 8 angles determined by
these three lines numbered 1 through 8. 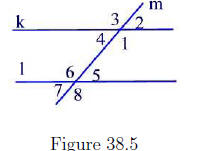 Theorem 38.2
Any pair of alternate interior angles have the same measure. 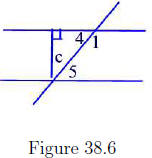 . Then using the corresponding angles theorem we can draw
Figure 38.7(b) which shows that

Problem 38.2
(a) How many angles are shown in the following figure?

Problem 38.3
Find the missing angle in the following triangle.

Problem 38.5
In the following figure

Problem 38.7
Following are the measures of ∠A,∠B,∠C. Can a triangle ΔABC be made
that has the given angles? Explain.

Problem 38.8
In the following figure 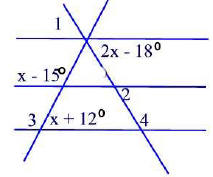 Problem 38.11
A fourth grader thinks that m(∠A) is greater than m(∠B).

(a) Why might the child think this?
(b) How could you put the angles together to show that m(∠A) < m(∠B)?

Problem 38.14
True or false? If false give an example.

Problem 38.15
Find the measures of the angles in the following figure.

Problem 38.16
How many degrees does the minute hand of a clock turn through

Problem 38.17
How many degrees does the hour hand of a clock turn through

Problem 38.19
Determine the measures of the interior angles.

Problem 38.21
A hiker started heading due north, then turned to the right 38° , then turned
to the left 57° , and next turned right 9°. To resume heading north, what turn
must be made?